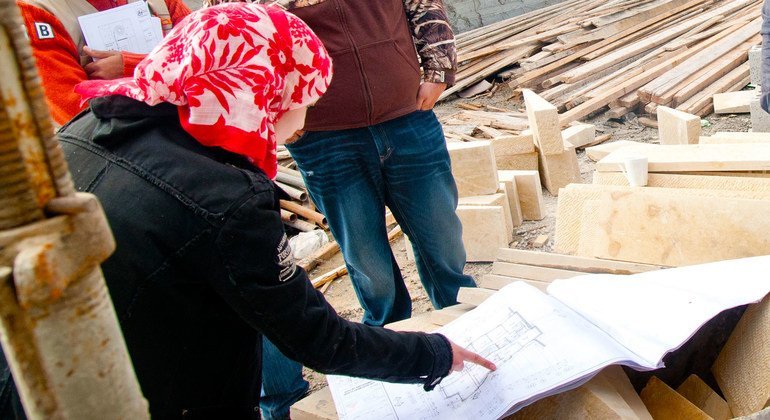 UN Deputy Secretary-General Amina Mohammed told the second of a series of roundtable discussions with renowned women economists that she was honoured to witness the bold ideas put forward by “a generation that is confronted by a world increasingly characterized by closure, rather than openness, xenophobia, rather than tolerance, vulnerability, rather than security, and, above all, a world haunted by the existential threat of climate change”.

While acknowledging the unfairness of their having to shoulder burdens that they did not create, she pointed out that “status, country, and identity markers” that one is born with, are “little more than a matter of chance”.

“We require an intersectional lens” to overcome barriers, upheld the deputy UN chief, underscoring that “importantly”, any effort that does not involve women themselves, “will ultimately fail”.

Ms. Mohammed said that the young economists presented “concrete, tangible, and bold solutions to two pressing issues facing youth today” – namely job scarcity and climate change – calling it “a further reminder of the need for us to listen to the voices of this generation”.

“They are not the next generation”, she continued, “they are the current generation and leaders, because it is in fact their world that we are building through our response and recovery to this crisis”.

Noting the Financing for Development initiative at the Ministers of Finance meeting next week and the High-Level discussions of the General Assembly that will follow, Ms. Mohammed maintained that it is “our job to do justice to these solutions and ensure that we propel them forward”.

The deputy UN chief highlighted a “unique moment” presented by COVID, one in which “stakeholders are willing to discuss the hard questions” as they relate to economic models and financial architecture where innovative solutions were once “relegated to the fringes of economic thought”.

“This would not have been possible even a few months ago”, she flagged, urging everyone to capitalize on the moment and “reorient the global financial system to make it truly work for all”.

Recognizing that systemic problems will continue to persist “unless significant action is taken”, she concluded her remarks by expressing confidence that “we are crafting the solutions we need for a more resilient, equal, inclusive and sustainable world as we overcome the COVID-19 crisis and achieve the Sustainable Development Goals”.

Recognizing that the impacts of the pandemic “have yet to be fully realized”, Mr. Guterres stressed the need to reskill young workers with the right abilities for the future economy.

“These include investing in technology skills, human skills that can’t be replaced by automation, and those aligned with green jobs”, the UN chief detailed.

Turning to the climate emergency, the top UN official said, “we face an existential crisis that is getting worse by the day”.

“We need polluters to pay for their pollution, an end to subsidies for fossil fuels and no new coal-fired power plants”, he spelled out, adding “we need bold actions that balance people, planet and prosperity”.

“These must be central to strategies that will allow us to recover better”, concluded the Secretary-General.