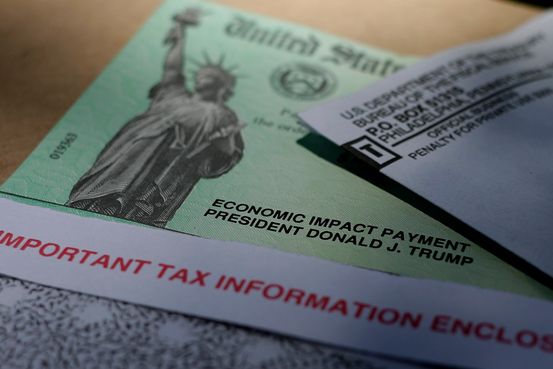 While Democratic and Republican lawmakers have expressed new optimism that they will reach a coronavirus-aid deal, the current round of talks excludes a second round of stimulus checks for households. Here is the latest on the negotiations, and a look at whether checks could still be on the table.

A bipartisan group of lawmakers has been working for weeks on a $908 billion package of coronavirus aid, much of which has been agreed upon. But lawmakers are still in negotiations over how to work out the two thorniest components: funding for state and local aid and what sort of legal protections to provide businesses, schools and other entities operating during the pandemic. Lawmakers have said they hope to finalize an agreement and turn it into legislative text in the next couple of days. Congressional leaders have been involved in the discussions, but could play a larger role in coming days.

Will that agreement include another round of stimulus checks?

The current bipartisan proposal includes enhanced jobless aid, but doesn’t include funding for another round of direct payments that would reach most households. Including payments similar to the $1,200-plus checks in the spring would cost hundreds of billions of dollars, and Republicans have been clear that $900 billion is already more than they would like to spend. Many Republicans are terming this round of talks an emergency aid package, rather than a stimulus plan.

But the White House has pushed Republicans to pursue a new round of checks, according to people familiar with the matter, of at least $600 a person.

So is it possible a deal could include stimulus checks?

It’s not out of the question yet. Democrats and a few Republicans are still pushing to add a second round of stimulus checks into any agreement this year. And before the election, President

urged Congress to send him additional coronavirus aid that included another round of direct checks.

(R., Mo.) said Monday he had urged Mr. Trump to veto any bill that didn’t include them. And many Democrats are still hoping to see them included.

“Direct checks are an excellent way to get money into the hands of people who desperately need it,”

What about next year?

has said that any aid Congress passes this year will just be a down payment on additional help he hopes to pass in 2021, which could include another round of direct checks. But any package would still have to clear the Senate, control of which remains to be determined by two Senate races in early January.

The chamber now has 50 Republicans and 48 Democrats. If the Democrats win both runoff races, they will wield a majority since Vice President-elect

will break any tie votes. If Republicans hold at least one of the seats,

(R., Ky.) will keep his job as Senate majority leader.

A bigger aid package is likely going to have a tougher time passing a GOP-controlled Senate, although the public-health conditions and economic recovery will help shape the political climate next year.

Will the eligibility rules change?

How quickly did households get checks in the spring?

In the spring, the IRS was able to distribute 80 million payments for $147 billion within about two weeks after Congress approved them and reached $267 billion within about two months. It is still making payments to the final groups of recipients, including low-income households who just provided the IRS their bank-account information and prisoners who are getting payments after a lawsuit challenged the government’s denial.

“We did at least as well as any other federal agency given the monumental tasks we inherited,” IRS Commissioner

How quickly would a potential new round of payments arrive?

If passed into law, a second round of payments could likely happen faster than the first one. That is because the IRS has information it lacked earlier in the year about households that don’t typically file tax returns, including Social Security beneficiaries and people who get veterans benefits. That means the government could send more people electronic payments and have less reliance on the slower check-printing process.

One potential complication, though, is whether a second set of payments would overlap with IRS preparations for the annual tax-filing season, which typically begins in late January and requires significant agency resources before then to program and test computer systems.

Write to Kristina Peterson at kristina.peterson@wsj.com and Richard Rubin at richard.rubin@wsj.com