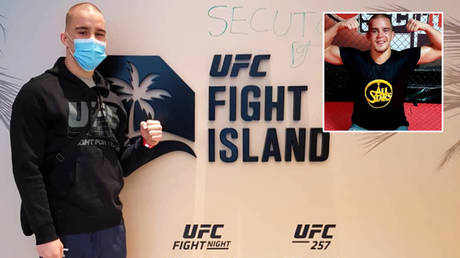 Todorovic has previously told RT Sport that he sees himself becoming “the Novak Djokovic of MMA” and revolutionizing the still-growing sport of mixed martial arts in his homeland.

But ahead of just his second fight as a fully-fledged member of the UFC roster on Saturday, he says that he has noticed a surge of interest in him from Russian fight fans.

“[A lot of] press covered my success and the victory,” Todorovic said ahead of his second stint on “Fight Island”.

Also on rt.com
‘I want to be the Novak Djokovic of MMA’: UFC newcomer Dusko Todorovic plans to be Serbia’s latest sports star (VIDEO)

“It was a bit unexpected. It felt good to see that someone recognized the success that me and my team did for the country, because we represented Serbia.

“It felt good seeing so many people recognize that and support us. Lots of people that didn’t know me now follow me.

“They became fans, you could say, and I’m really glad that we are spreading the good influence on our people back in Serbia.

“Also, it’s not just in Serbia. The whole Balkan region is following [and] supporting, so I’m very glad about that.”

As anyone who is even vaguely familiar with fight sports will attest, the pressure of having the expectations of a country on your shoulders can be a burden, but Todorovic says that he doesn’t shirk away from any such responsibility.

Instead, he embraces it.

“To be honest, I don’t feel any pressure,” he said. “I don’t let that pressure me. My performance is my performance, and no one can influence that.

“I believe we did our homework and we prepared well for this fight – and that’s it. No amount of people watching can pressure me or make me lose sleep coming up to a fight.“

As Todorovic continues to add more and more wins to his career ledger, he says that he is noticing his fanbase swell extraordinarily.

Each fight brings with it legions of new social media followers from the Balkans and even Russia, where he says his support is simmering nicely.

“Lots of digital media have written articles about my previous victory, about this upcoming match,” he explained.

“I’ve definitely noticed from, let’s say, those foreign media – the most support is from Russia, definitely.”

Through Todorovic’s spotless career, it wasn’t until his fight on ‘Dana White’s Contender Series’ in August 2019 that he went to a decision – he hadn’t even seen a third round up to that point.

One accusation sometimes levied towards quick finishers such as the Serbian is that they lack experience in close fights, many of which tend to go the distance.

But this isn’t an issue that concerns him.

“We are always learning some new stuff but after my ‘Contender Series’ fight I gained another level of confidence because I never experienced a three-round fight at such a high tempo and pace.

“Just experiencing that, I feel a bit easier. If we go to deep water, I know I can handle the pressure.

“My cardio can handle it. It definitely feels good to be able to overcome that adversity.”

Also on rt.com
‘He holds all the trump cards’: Khamzat Chimaev ‘will face Leon Edwards on March 13’ as Russian fighter tips UFC star to be champ

More From: US NEWS