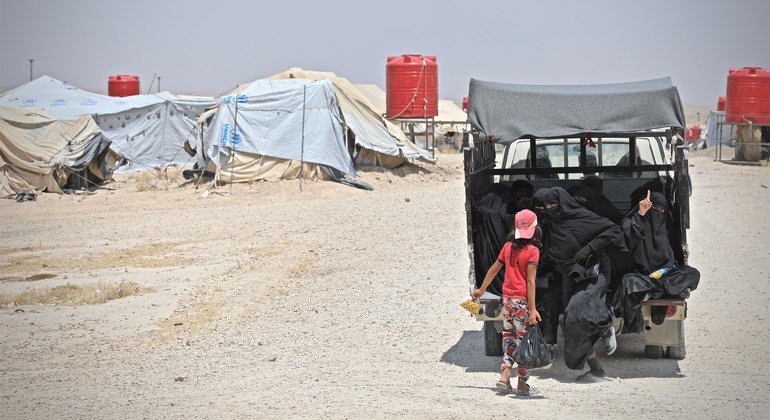 “This is a momentous task — to establish a foundational act, a social contract for Syrians — after a decade of conflict and amid deep divisions and mistrust”, said Geir Pedersen, describing preparations for the third session of the Constitutional Committee on 24 August.

To be sure, the session comes at a time of regional tragedy, he said, with many Syrians among those killed or injured in the deadly 7 August explosion in Beirut.  Deputy Special Envoy Khawla Matar, who was on her way to Damascus to prepare for the Committee session, was injured by the blast and is now on the road to recovery.

Throughout, his Office has been in regular contact with the co-chairs representing Syria’s Government and the Syrian Negotiations Commission, as well as members of the “middle third”.  Strict COVID-19 health and safety protocols will be followed.

He recalled that the Constitutional Committee meets on the basis of an agreement to set a schedule and process for drafting a new Constitution.  It calls on parties to respect the UN Charter, as well as Syria’s sovereignty, unity, independence and integrity, and the Syrian-led and -owned nature of the process.

He said the accord also recalls the need for a broader political process to implement resolution 2254 (2015), mandating the Constitutional Committee to “prepare and draft for popular approval constitutional reform as a contribution to the political settlement in Syria.”

Among the challenges, he pointed to “acute and growing” concern over COVID-19, noting that the total official number of cases in Syria hit 2,114 on 18 August – including 1,844 cases confirmed by the Health Ministry in Government-held areas.  There are 51 cases in the north-west, including the first cases in two internally displaced person camps, and 219 cases in the north-east.

While testing capacity has increased, it remains vastly insufficient, he said, with all areas experiencing “significant” shortages of medical and personal protective equipment.  He pressed the Council to help secure humanitarian access for all those in need of relief.

A call for calm in north-west

On the security front, he said the calm brought about by Russian and Turkish efforts in the north-west continues to hold, however, there were reports in July of mutual rocket attacks, artillery strikes, ground clashes and sporadic airstrikes.  Attacks by Islamic State in Iraq and the Levant (ISIL/Da’esh) also continue to grow in frequency and impact.

This is a momentous task – to establish a foundational act, a social contract for Syrians – after a decade of conflict and amid deep divisions and mistrust – UN envoy

In the northeast, he cited skirmishes in Tell Abiad and Ras al-Ain, and protests in Deir-ez-Zor, following the killing of prominent tribal leaders.  State media accused the United States of opening fire on a Government check point, while the United States stressing it responded in self-defence.

In the south-west, he said Israel’s air strikes on military targets are a reminder that many tensions are international in scope.  “Syria’s sovereignty remains compromised,” he asserted, and the presence of five foreign armies pose serious risks for international peace and security.

International players can make a difference

“There is a real need for constructive diplomacy among key international players”, he continued, expressing hope that opportunities for direct contacts will allow them to bridge significant gaps.  There is “ample scope” for them to make a difference, working with Syrians to realize resolution 2254 (2015) by ensuring the release of detainees and clarifying the fate of missing persons.

Creating a safe, neutral environment for refugees to return is also critical, he added.  He called for reaching a final political settlement, built around a new Constitution and inclusive elections under UN supervision, and the full restoration of Syria’s sovereignty.