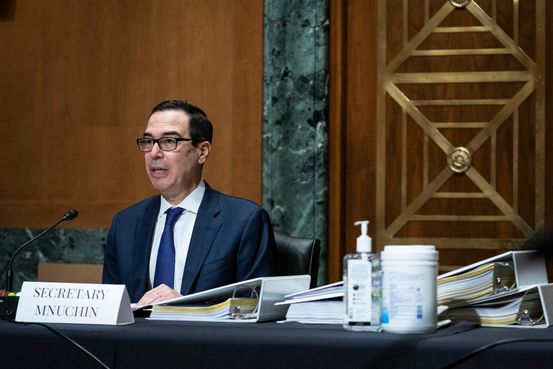 telling a congressional oversight panel Thursday that taxpayers will profit from the loan.

Members of the bipartisan Congressional Oversight Commission, the watchdog group monitoring Treasury loan programs, have questioned how the Overland Park, Kan.-based firm was able to qualify for government aid despite its precarious financial position before the pandemic.

Mr. Mnuchin acknowledged the loan was risky and said he was under pressure from lawmakers to extend credit to struggling firms, even if it meant losing money.

“If my bank had been underwriting this loan, we would not be making this loan,” said Mr. Mnuchin, who served as chairman of OneWest Bank before joining the Trump administration. “That doesn’t mean I don’t think we’re secured and we’ll get our money back.”

YRC, one of the nation’s largest trucking companies, qualified for the aid through a $17 billion loan program for firms deemed critical to maintaining national security. The Treasury Department has said it made the national-security decision based on a recommendation and guidance from then-Defense Secretary

YRC carries 68% of the Defense Department’s less-than-truckload shipments, in which cargo from shippers is combined in a single trailer, and it is the leading transportation provider to the Department of Homeland Security and U.S. Customs and Border Protection, the Treasury Department said in a Sept. 4 letter to the commission.

Mr. Mnuchin said the government had expected to take losses on the loan, but said the economy had rebounded more quickly than expected, as had the company’s fortunes. “I’m actually quite proud of the fact that we did YRC,” he said. “It saved lots and lots and lots of jobs. I’ve received calls from the company, from truckers, from other people who appreciate this.”

He said “whoever is Treasury secretary” next year should consider selling the loan and recovering the profits to taxpayers.

said in an interview this summer that the company had pursued the loan because of “the hole created by the pandemic.”

YRC generated $4.87 billion in operating revenue last year but has also struggled for years under a heavy debt load. The company employs about 30,000 workers, including 24,000 members of the International Brotherhood of Teamsters. It is the fifth-largest U.S. trucker by 2019 revenue, according to transportation research provider SJ Consulting Group Inc.

had ties with White House adviser

Mr. Mnuchin said neither Mr. Kushner nor anyone on his staff contacted him about the YRC loan.

Rep. French Hill (R., Ark.), who also serves on the commission, questioned the loan terms agreed to by the Treasury, suggesting the government hadn’t secured adequate collateral from the firm to protect American taxpayers. When Mr. Mnuchin touted YRC’s current equity value, Mr. Hill replied, “That’s because the stock has increased because you made this loan.”

YRC shares soared 75% after the aid agreement was announced July 1, and are up nearly threefold as of Thursday. The company’s lenders also gave the troubled trucker a 3 ½ year reprieve on its debt load after the aid package was announced.

A government watchdog report released Thursday found Treasury officials fast-tracked their evaluation of the YRC loan, and didn’t follow standard procedures for reviewing the application, which was approved nearly three months before any other loans in the national-security loan program. Although other firms faced similarly difficult financing conditions, the Treasury didn’t fast-track any other applications based on financial need, the report found.

Of the 74 firms that applied for loans under the national security program, Treasury approved 11 loans, totaling roughly $736 million.

Write to Kate Davidson at kate.davidson@wsj.com