The biggest Lego set ever created goes on sale on Black Friday.

The Danish toy company’s plastic-brick replica of Rome’s Colosseum contains an anxiety-sparking 9,036 pieces. Can you imagine how many there’d be if the ancient amphitheater hadn’t lost sections over the centuries due to earthquakes and stone pilferers?

Lego’s Colosseum surpasses the previous record holder for size, the currently out-of-stock Star Wars Millennium Falcon set, by nearly 1,500 pieces. The Star Wars toy is more expensive, though, costing an astronomical $799.99 compared to the Colosseum’s $549.99 price tag—still an example of excess worthy of a Roman emperor.

According to a press release, Lego designer Rok Zgalin Kobe took pains to stay as true as possible to the real-life Colosseum’s architecture. Plastic bricks come in three different shades to mimic the structure’s fading exterior. Also as in Rome, the Lego version has three levels, each with detailed arches and three different kinds of columns (say it with me, art history majors: Doric, Ionic, and Corinthian) topped in some cases with decorative volutes that are actually repainted, upside-down Lego roller skates usually used for characters in other toys. 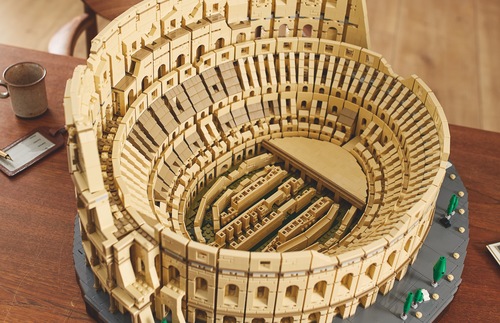 We’re not saying a plastic model could ever replace the sense of awe gained by traveling to Italy and laying eyes on the Colosseum for yourself—unless, of course, you manage to put the whole set together, in which case you should absolutely demand the thunderstruck praise of your loved ones.

If they resist, point out that the real Colosseum took 10 years to build, relied on the work of a large captive labor force, and never had to contend with the threat of tiny pieces falling into unreachable spots under furniture. 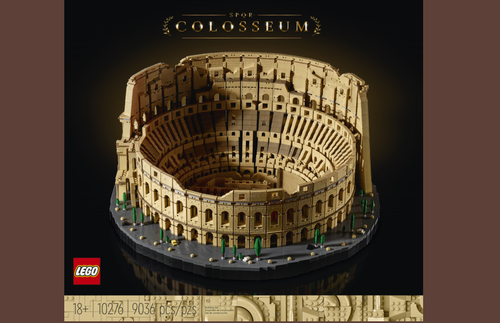 The Lego Colosseum set will be available in Lego Stores and at Lego.com starting Friday, November 27.