Ireland may be the land of leprechauns, banshees, and merrows, but its most magical being was real, and it swam in the waters off County Kerry.

In 1984, a lone, bottleneck dolphin was spotted in the bay of the town of Dingle, on Ireland’s west coast, by a lighthouse keeper who was escorting fishing boats out to sea. The dolphin was still there when the keeper brought the boats back into the harbor, and there again the next day, the day after that, and on and on.

By 2003, when I first visited this charming town, every shop sold dolphin souvenirs, and the laughing face of Fungie, as the locals called him, stared down from posters everywhere.

Like many tourists, I took a half-hour cruise with my then four-year-old and six-month-old daughters so we could commune with Fungie, and there was no suspense as to whether he would come and greet the boatload of gawking tourists. He always did, and we still have blurry photos of him dancing through the waves.

The dolphin swam near humans most every morning not because he was trained to do so, but because for some mysterious reason, he loved human company. For my toddler, waving at Fungie was more exciting than staying in a castle, seeing the cliffs of Moher, and pretty much everything else we did on that trip.

Last week, after 37 years in the harbor, Fungie went missing.

Though the dolphin has disappeared for short spells over the years, he was never gone for more than a day or two. A search party was sent to look for him this week, but it had to be called off due to inclement weather.

What could have happened? A local marine biologist named Kevin Flannery noted that the dolphin was last seen interacting with a pod of minke and humpback whales. “They catch and scatter a lot of food, and it might have been easier to go with them. He might have then joined up with another pod of dolphins,” Flannery told the Washington Post.

Or he may have succumbed to old age. Fungie would have been at least 40 this year, Flannery estimates, which among dolphins makes him a senior citizen. 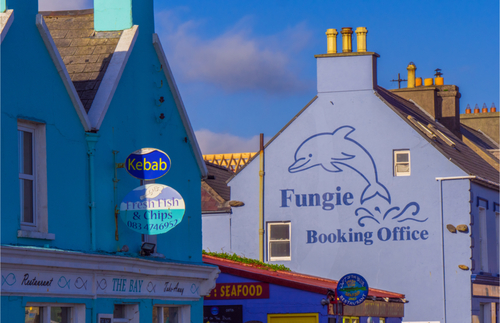 Whatever happened, if Fungie doesn’t return, it’s a blow for the tiny town of Dingle (pop. 2,000), which receives half a million visitors each year specifically to see the friendly dolphin.

Ireland has been in a new lockdown since October 21 thanks to rising coronavirus cases. At the moment, people are not allowed to travel more than 5 kilometers from home, and nonessential businesses have been closed again. So no tourists were disappointed this week, but the loss of Fungie could cut visitation in the future, which is a shame, since this charming town has one of the best traditional music scenes in all of Ireland.

But beyond commerce, Fungie was a beloved neighbor. Journalist Seán Mac an tSíthigh, who is from Dingle, told the BBC that the little dolphin inspired deep grá (the Gaelic word for love) in the people of Dingle, noting that Fungie was “part of Dingle’s identity. . . . He is known throughout the world and because Fungie is known, Dingle is known.”

In 2019, Fungie was named the oldest solitary dolphin in the world by the Guinness World Records.

To read more about Fungie and the town of Dingle, pick up a copy of our Frommer’s Ireland 2020 book.