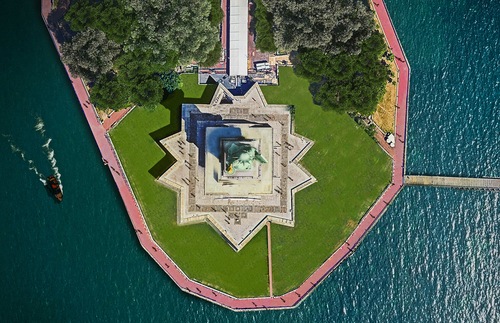 It’s hard to disguise a colossal green lady in New York Harbor. Or a 1,000-foot-tall pointy whatsit in the middle of Paris.

Yet a newly released series of images adds a little mystery to some of the world’s most famous landmarks, including the Statue of Liberty and the Eiffel Tower.

The trick is to change the viewer’s perspective. The images, created by the editorial team at Budget Direct Travel Insurance, are based on satellite captures taken directly above the landmarks using Google Earth Pro.

Then digital effects were added—shifting light patterns, traffic from cars, pedestrians, and boats—to make the static images come to life. The resulting photos, with their looping motion picture elements, are called “cinemagraphs.” Which sounds like a fancy word for GIFs.

Whatever the name, each picture succeeds in making us do a double take, restoring a little jolt of awe for icons we sometimes take for granted due to overexposure (James Corden has a similar problem).

What’s more, the images give us a chance to appreciate, without having to rent a helicopter, that some great sights are great from any angle.

Check out, for instance, the 11-pronged star that the Statue of Liberty stands on in the photo at the top of this post. That’s a rare use of the hendecagram in architecture that the earthbound are liable to miss.

For more of Budget Direct Travel Insurance’s images of famous landmarks seen from above, look below.